Often one of the questions ordinary people pose when asked about climate change is “what can my local community do about it?” Many people assume there’s nothing their city, town, or locality can do despite knowing that they are vulnerable to its effects.

For my Applied Climate Experience ( ACE) capstone project for my master’s degree in Climate Change and Society at NC State, I carefully studied North Carolina county and municipal efforts to curb emissions and adapt to climate change’s effects. My work found that local Environmental Advisory Boards (EABs) are the best way for local communities to prepare for climate change and reduce emissions. EABs are local county, city, or municipal level boards comprised of citizens meant to advise local officials on environmental issues such as climate change. The boards themselves are often approved by a city council or mayor’s office and have various amounts of board members who serve for a fixed period and meet at least once a month.

Past efforts by EABs have shown that they can have success implementing strategies aimed at climate adaptation and mitigation. For example, Asheville is developing a 100% renewable energy initiative to reduce their emissions in an economically efficient and socially responsible way. The city’s plan intends to “reduce the City’s municipal energy consumption, ensure that the concerns of historically marginalized communities are incorporated and the benefits of this transition are shared by all communities throughout Asheville.” This plan was implemented in part due to the work of Asheville’s Sustainability Advisory Committee on Energy and the Environment board (the city’s equivalent of an EAB).

Despite boards like Asheville’s making great strides, EABs have not been utilized enough in preparations to deal with climate change or other environmental issues. For example, I found that 89% of counties in the state do not have an Environmental Advisory Board or equivalent. Figure 1 below shows how most of the counties that do have EABs are in mostly city or suburban areas such as Raleigh or Greensboro. While the areas without EABs include nearly the entire coastline of North Carolina, the majority of rural areas, and the majority of the counties in the Appalachian Mountains. This shows how some of the areas of our state that are most vulnerable to climate change are the least prepared in terms of local planning efforts to build resilience or reducing their emissions. 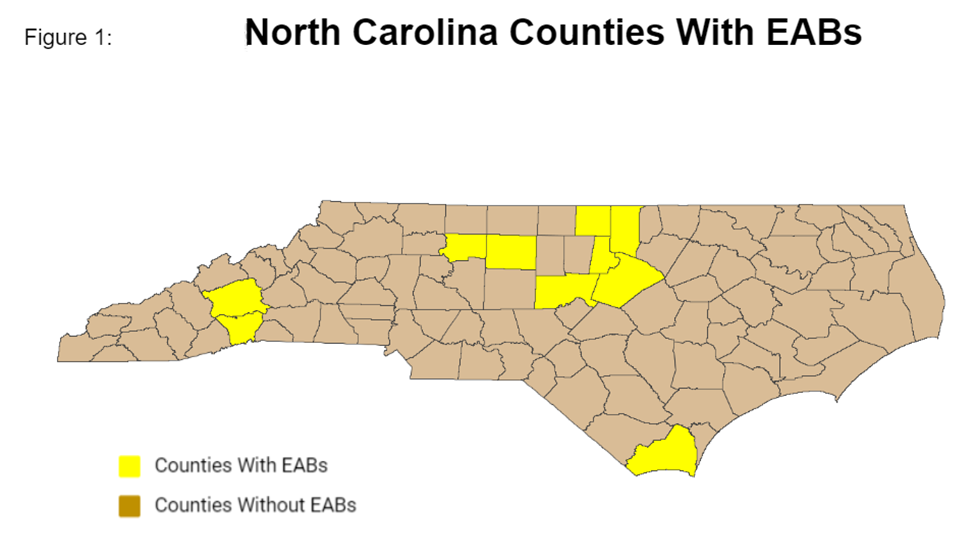 North Carolina counties currently without an EAB would benefit from having one so that they can start long term and short term planning efforts to build resilience to sea level rise, drought, extreme weather events and other climate hazards that will be amplified by climate change and also to curb emissions as a method to mitigate the impact of heat-trapping gases. After experiencing many EAB meetings, communicating with board members and people involved, and analyzing the climate policies and plans made by EABs, I have come up with a strategy EABs can follow to be successful at preparing for climate change at the local level. This process involves having EAB’s embrace readily available climate information, implementing a climate action plan, and that EABs follow the Vulnerability, Consequences, and Adaptation Planning Scenarios (VCAPS) process. Furthermore, a proprietary climate policy toolbox has been devised listing over 75 different strategies for local communities that can address climate change

This process as well as the other findings on EABs will be posted publicly later this month in a final report meant to guide prospective EABS around the state and also to advise current EABS on how they can operate more effectively. Furthermore, the findings on EABs will be presented at a Sustainability Workshop hosted by APWA on March 24th in Raleigh, NC. What this research represents is a way for local counties to fight back and use the best available scientific data, projections, and scenarios to make informed decisions regarding climate change.

The Full Report and other information on my research can be found on my linkedin profile once it is released: https://www.linkedin.com/in/robert–bennett/

Ready to Get Started?